Warning: "continue" targeting switch is equivalent to "break". Did you mean to use "continue 2"? in /homepages/9/d100008865/htdocs/alixolson.com/cms/wp-content/themes/Divi/includes/builder/functions.php on line 5586
 Left Lane: On the Road with Folk Poet Alix Olson | Alix Olson - spoken word artist

Left Lane: On the Road with Folk Poet Alix Olson 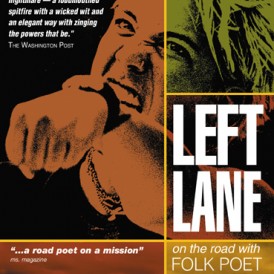 A year in the making, LEFT LANE chronicles life on the road with Alix and her road manager/filmmaker Samantha Farinella as they tour the country connecting the dots from a high school visit in Lincoln, Nebraska to a cd release party in New York City.  LEFT LANE highlights spoken-word performances from around the country and a plethora of behind the scenes glimpses at the search for independent thought, grassroots defiance, passionate connection, organic food and clean laundry. Accompanied by the music of Pamela Means, Melissa Ferrick, Ember Swift, Lyndell Montgomery, Chris Pureka, and Peter Mulvey, LEFT LANE offers a few more untethered voices to the nucleus of grassroots progressive struggle and the future of laughter, rage, and optimism.

“Olson uses her witty and sympathetic voice to highlight a grassroots struggle against intolerance that is as entertaining as it is poignant.”

“One standout film is Left Lane.. which takes the viewer along as Olson performs in places ranging from Nebraska to the Michigan Womyn’s Music Festival. The 29 yr. old Olson is a mesmerizing firebrand, a joyful dyke-feminist preacher.”

“(Left Lane) takes you on the road with fun, funky, and fiery Alix the Great: irresistable force… she may just infect you with optimism… Olson is running at full velocity.

“Ready for a political and cultural revolution? Well, sit back and watch Left Lane: On the Road with Folk Poet Alix Olson... Left Lane shows more than just a rebel with a cause. We see the remarkable response of her audiences, fellow artist-activists, and a voice that just won’t quit. That’s quite refreshing in this age of post ’04 election apathy. With a sardonic smile and a twinkle in her eye, Olson takes her art through poetry, song, comedic skits and downright righteous anger. Pieces like “America’s On Sale” and “Pirates” echo George Carlin, Lenny Bruce and the Beat generation.. a candid look at a woman rake(ing) issues of race, class, gender, and sexuality through the coals is definitely inspiring.”

No shows booked at the moment.