Alix Olson is pursuing her PhD in Political Theory at (and received her Graduate Certificate in Advanced Feminist Studies from) the University of MA-Amherst.  Her dissertation project, drawing from queer, feminist and democratic theory, thinks about the ways that discourses of im/maturity govern scenes of political action. Alix has published articles in New Political Science, Wagadu: Journal of Transnational Women’s and Gender Studies and authored the chapter “Archiving Optimism” in Agitation with a Smile: Howard Zinn’s Legacies and the Future of Activism (Paradigm, 2013). At UMass-Amherst, she has designed and taught her own courses including “Art and Politics” (Political Science, 2014) and “The Feminist Art(s) of Politics” (WGSS, 2015). Alix has received the University of Massachusetts-Amherst Student Choice Teaching Award (2012), the campus-wide Distinguished Teaching Award (2013) and the Center for Research on Families Fellowship (2013). In 2013, Alix was invited by APSA’s Siting & Engagement Committee (SEC) to participate at the annual meeting in a roundtable on the social responsibility of APSA and the profession. This year, Alix was awarded the New Political Science Christian Bay Award for the APSA paper that “best exemplifies the goal of NPS: making the study of politics relevant to the struggle for a better world.” She is currently the Caucus Representative for New Political Science.

Alix also is an internationally touring spoken word artist who has produced three CD’s, several books of poetry and an award-winning documentary film Left Lane. Her latest album Protagonist was produced by folk-rocker Melissa Ferrick. Alix is the author of a Ms. Magazine cover story, co-author of Burning Down the House (Soft Skull Press, 2003) and is the editor of Word Warriors: 35 Women Leaders in the Spoken Word Revolution (Seal Press, 2007) a book bell hooks describes as “daring to be heard.. to resurrect you.” For this work, Alix has received a New York Foundation for the Arts Fellowship, Barbara Deming Award, Hedgebrook Fellowship (declined), Washington DC’s Rape Crisis “Visionary Award,” and OutMusic’s “Outstanding Artist-Activist.” Her work has been featured on a variety of NPR programs, HBO’s Def Poetry Jam, Air America with Rachel Maddow, in the New York Times, Washington Post, Curve Magazine and in dozens of compilations and anthologies.

I am a doctoral candidate in the Department of Political Science at the University of Massachusetts Amherst where I also received my Graduate Certificate in Advanced Feminist Studies.

My research interests include contemporary social and political thought, critical theory, transnational feminisms, and queer politics. My dissertation project The Promise(s) of Resilience: Governance and Resistance in Complex Times offers a critical examination of the rise and circulation of “resilience” within 21st Century political life and the ways it is fundamentally re-ordering peoples’ understanding of themselves, the world, and possibilities of action. I argue that discourses of “resilience” intensify and extend the power relations of late liberal governance, even as its promises (like security) are evidently revoked as anachronistic expectations in a globalized world. Grounding my analysis in a wide breadth of empirical case studies—from the United Nation’s refugee policies and post-Katrina “regeneration” programs to self-help literature and social movements—I show how resilience discourses work to produce a sustainable human infrastructure capable of upholding, as well as resisting, the crisis conditions of late capitalism. My dissertation work has been supported by the Center for Research on Families, the UMass Amherst Diversity Fellowship and the Five College Women’s Research Center. I have published peer-reviewed articles in The Journal for a New Political Science, Wagadu: Journal of Transnational Women’s and Gender Studies and a peer-reviewed chapter in Agitation with a Smile: Howard Zinn’s Legacies and the Future of Activism (Paradigm 2013). I have received the “Christian Bay Award” for the paper presented at APSA that “best exemplifies the goal of New Political Science: making the study of politics relevant to the struggle for a better world.” I am currently serving as program chair for the New Political Science division at the APSA 2018 annual meeting.

At UMass-Amherst, I have designed and taught courses for the Political Science and Women’s, Gender and Sexuality departments and have received the university-wide Distinguished Teaching Award and the Residential First-Year Experience Student Choice Teaching Award. This year, I was invited by the Vice Chancellor to organize and direct the UMass’s “Many Voices. One Community,” a Convocation event for 5500 incoming students. Prior to doctoral studies, I toured internationally for over a decade as a spoken word artist. I have published widely within popular media including in Ms. Magazine and editing the first all-women’s spoken word anthology Word Warriors: 35 Women Leaders in the Spoken Word Revolution (Seal Press, 2007) which bell hooks calls an anthology “to resurrect you.”

“…she weaves between critiques of capitalism and consumerism, patriarchy and misogyny—topics that brought her to our attention many years ago—albeit with slightly changed perspective of motherhood.”

Alix Olson is a bonafide superstar of the spoken word community. She’s released three albums (“Protagonist,” “Independence Meal” and “Built Like That”); been the editor of a spoken word anthology (“Word Warriors: 35 Women Leaders in the Spoken Word Revolution”);...
Read More

Women At War: Alix the Conquerer

“Anti-war, anti-gender oppression and anti-intolerance, folk poet and spoken-word artist Alix Olson really isn’t the negative type. She’s the patriarchy’s worst nightmare- a loudmouthed spitfire with a wicked wit and an elegant way with zinging the powers that be.”

I pull up in front of a charming Massachusetts country home, with a black Subaru and a red pick-up truck parked in the driveway (lesbian home, anyone?), overlooking a flooding river. Rachel bounds out in mud boots to greet me and direct my parking. We settle in front of a roaring fire with mugs of coffee and have a chat. 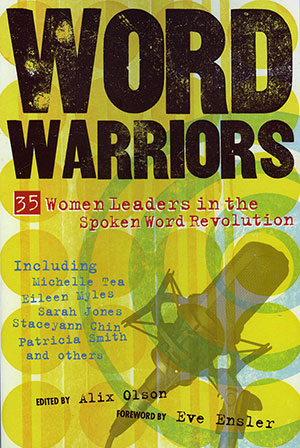 Coming to voice is coming to power ~ daring to make life in words ~ daring to be heard. That is the story this anthology tells. Hear it, listen in, let it resurrect you, let it take you from the deep silence into the comfort of soulful sound.
–bell hooks, author of All About Love: New Visions and poetry collection When Angels Speak of Love

“Word Warriors is a treasure and a long time coming. A lot of my heroes are in this book. Their words have kept me company for a host of nights, in dark bunks and on lonely roads, helping me to carry on.”
-musician Amy Ray of the Indigo Girls

“It’s difficult to find role models who’ve stood up to the system and lived to tell the tale. Each and every one of the writers in this collection is a role model for anyone who wants to change the world. And if I’m feeling scared, powerless, sad, or less than, this is the book I intend to read to get my courage up.”
—Kate Bornstein, author of Hello, Cruel World and Gender Outlaw

“Word Warriors has changed me. Like an incantation, lines from the thirty-five stories from warriors who are fighting the same fight dressed up in thirty-five different ways have mutated into mantras in my mind. Word Warriors is not a book, it is a spell that will change things for everyone who reads it.”
—Inga Muscio, author of Cunt and Autobiography of a Blue-Eyed Devil

“If you, like me, are often scared of poetry, this book is for you. The personal essays are like alluring hosts, leading you graciously but forcefully to writings that will make you cry, turned on, amazed, and awake.”
–Jennifer Baumgardner, author of Look Both Ways: Bisexual Politics and coauthor of Manifesta: Young Women, Feminism and the Future